Uruguay’s Bodega Garzón has signed up top Argentine chef Francis Mallmann as its culinary director as part of its bid to build the country’s reputation as a winemaking region and luxury tourism destination. 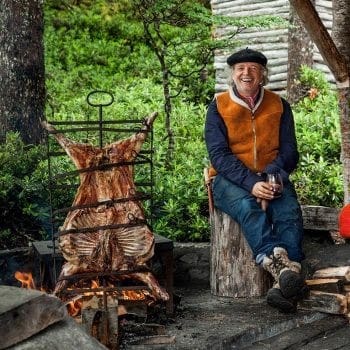 Bodega Garzón, in the Maldonado district near Punta del Este, opened last year following an investment of $85m, and is the vision of Argentine oil and gas billionaire Alejandro P. Bulgheroni.The Bulgheroni Family Vineyards group has grown rapidly in the past six years, snapping up wineries at a rate of two per year since 2011, and is keen to position Uruguay as a winemaking region in the minds of consumers, as well as a tourism hotspot.

Its flagship 524-acre estate in Uruguay comprises not only a 200 hectares vineyard and its own winery, but also a luxury hotel that will soon offer a $180,000-entry-fee wine club where members will be able to create their own wines from select parcels.Last week the winery announced that renowned Argentine chef Francis Mallmann would be taking on the role of its ambassador and culinary director at The Restaurant at Bodega Garzón – a 12-seat restaurant conceived by Mallmann.

The restaurant offers guests a selection of prix-fixe menus – Estate Menu, Reserva Menu, and Single Vineyard Menu – paired with the winery’s wines – with food prepared by Mallmann’s team using three open-fire cooking tools – an infiernillo, a parrilla with planchas and a brick oven.Sample dishes include burnt eggplant with chermoula, yogurt cream and almonds; slow-cooked sweetbread on the grill with humita; and domo-cooked pineapple and cheesecake bruleé. Uruguayan caviar, Wagyu steak and Texel lamb from the estate’s cattle ranch, and produce from the winery’s organic garden, will also feature.

“The exceptional talent and passion Chef Mallmann brings to The Restaurant at Bodega Garzón allows us to fulfill our goal of creating a singular culinary experience that is among the finest in the world and yet distinctly expressive of this special place,” said Bulgheroni.“As our wines reflect the land’s purity and embody the spirit of the Uruguayan culture, our cuisine must as well.”

Located 11 miles from the ocean, Garzón is exposed to Atlantic breezes, rather than the warmer river influence in its traditional wine region of Canelones. The vineyard itself was largely planted in 2008 and currently features 200 hectares divided into a patchwork of plots just 0.2ha in size, spread over about 10km.