Wine and Cheese: Wines from Uruguay

Posted in Investments in Uruguay, living and working in Uruguay, Tourist attraction On September 25, 2017 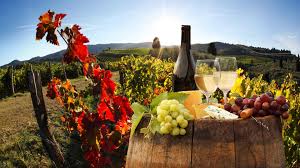 Uruguay, a tiny country on South America’s east coast, is bordered by Argentina and Brazil. This is a country with the highest per-capital beef consumption in the world, where cattle outnumber people four to one.

The chivito (translates as “little goat”) is the national sandwich of Uruguay, which is jam-packed with flavor and ingredients. Thin, grilled slices of beef are covered with mozzarella, lettuce, tomatoes, bacon and a fried egg. Many optional toppings including onions, olives, peppers, pickles, mayonnaise and ketchup have also found their way into the sandwich.

Uruguay is South America’s fourth biggest wine producer (after Argentina, Chile and Brazil), but currently less than 5 percent of its bottles are exported. There are about 190 wineries with 22,500 acres of vineyards planted to sauvignon blanc, chardonnay, viognier, albariño, merlot, cabernet franc and cabernet sauvignon.

But the grape Uruguay is most famous for is tannat, a thick-skinned, dark grape capable of producing incredible dark, rich and full-bodied red wines. Tannat, originally from the Madiran district near Bordeaux, France, has 6,500 acres planted, making Uruguay the world’s largest producer. Beginning in 2018, every bottle of wine from Uruguay will carry a QR code on the label, which can be scanned to reveal everything you need to know about the wine, including soil and vineyard parcel number.

I had an opportunity to taste some of the wines and here are my notes. (Note: Serve all recommended cheeses at room temperature for optimum enjoyment.)

2011 Alto de la Ballena “Cabernet Franc.” Deep, garnet colored with a full bouquet and taste of berries, black currants and cherries. Full-bodied and loaded with tannin. Serve with a piece of Cantal cheese from France.

2011 Alto de la Ballena “Merlot.” Bright ruby color with a luscious bouquet of spicy cherries and cinnamon. Medium bodied with flavors of plums and spices. Try with some fontina cheese from Italy.

2014 Bodega Garzón “Tannat.” A full bouquet and taste of black raspberries, black currants, cocoa, dried plums, spices, raisins and coffee. The aftertaste is long and quite pleasing. Don’t miss it! A wedge of your favorite blue cheese would work quite well.