Posted in Investments in Uruguay, living and working in Uruguay, real estate, Tourist attraction On February 7, 2019 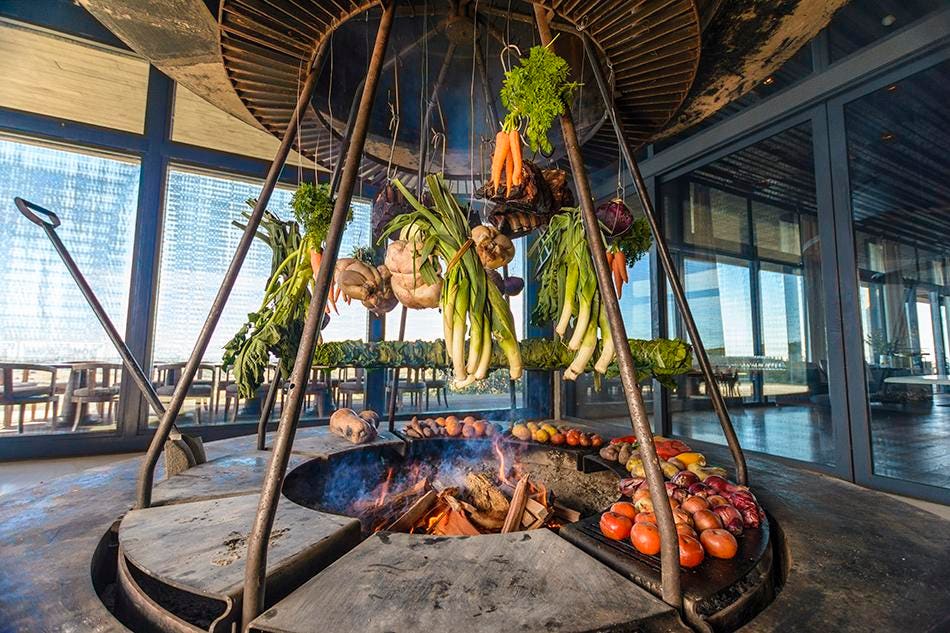 The typical style of cooking used at the Restaurant at Bodega Garzón.BODEGA GARZÓN

It’s my first trip to South America and I’m quickly realizing that I know absolutely nothing about the place.While I’ve traveled other parts of the world extensively, South America has always been a place that has eluded me for one reason or another. A place that I kept saying, “I’ll get to it eventually,” making up excuse after excuse as to why I couldn’t make the relatively easy journey south to experience this so buzzed about continent.And I realize that generalizing South America isn’t getting me off on the right foot either. A trip to Rio de Janeiro would be as radically different as, say, one to Patagonia. (Both of which are completely appealing in their own way.)So, I’m starting somewhere in the middle.

A place not too overwhelming geographically. A place that’s politically and economically stable. A place where you’re just as likely to find an incredibly well balanced and beautiful glass of wine as you are a sandwich with steak, mozzarella, bacon, eggs and ham on it in the street.A place where life moves just a little bit slower. Wine tastes just a little bit sweeter. And the people are undeniably good looking everywhere you look.I’m starting in Uruguay.And as easy as it was for me to fall in synch with a city like Montevideo (a city I could certainly see myself spending a lot more time in), it was the smaller towns that were calling my name.Towns like José Ignacio, a small, seasonal beach heaven that’s a magnet for celebrities and wealthy South Americans attracted to its laid-back, super cool bohemian vibe. And even the nearby Punta del Este, a Miami-meets-the Hamptons mini-metropolis.But it wasn’t until arriving in Garzón, a village with not much more than what I discovered, that I found what I was looking for in South America – a place beyond tourists.

You leave Garzón as quickly as you arrive. You can count the number of restaurants and art galleries in town on one hand. The same goes for hotels (there are three).But that’s exactly what’s so intriguing about it. Well, that, and the fact that Francis Mallmann has a five-room boutique hotel and restaurant here, Hotel and Restaurant Garzón by Francis Mallmann.If you’re not familiar with Mallmann, a chef with restaurants all over the world, including his latest opening in Provence, he’s synonymous with the Uruguayan and Argentinean style of cooking that uses not much more than a simple setup utilizing fire and smoke. It’s about as simple, but as hard to execute as it gets.

He’s a chef whose tables are adorned with centerpieces of lemons “because they evoke joy” and speaks as eloquently as a South American poet, while wearing a freshly-picked gardenia pinned to his chef’s coat and patches on his jeans (patches he most likely sewed there himself). Garzón is home to Mallmann. He’s not there because it’s the lively city that a chef must have a restaurant in, like a Miami or New York (of which he does have restaurants in both), Garzón is about as far away from that as it gets.The restaurant is a place where you go to enjoy the simple things in life. A perfectly cooked steak drizzled with olive oil and herbs. A beautiful local fish baked in a salt-crust. A smoky simple Negroni.There’s nothing particularly fancy about the food at Restaurant Garzón (and the food that Mallmann does in general) that should make a meal here as memorable as it is. But somehow, it is. 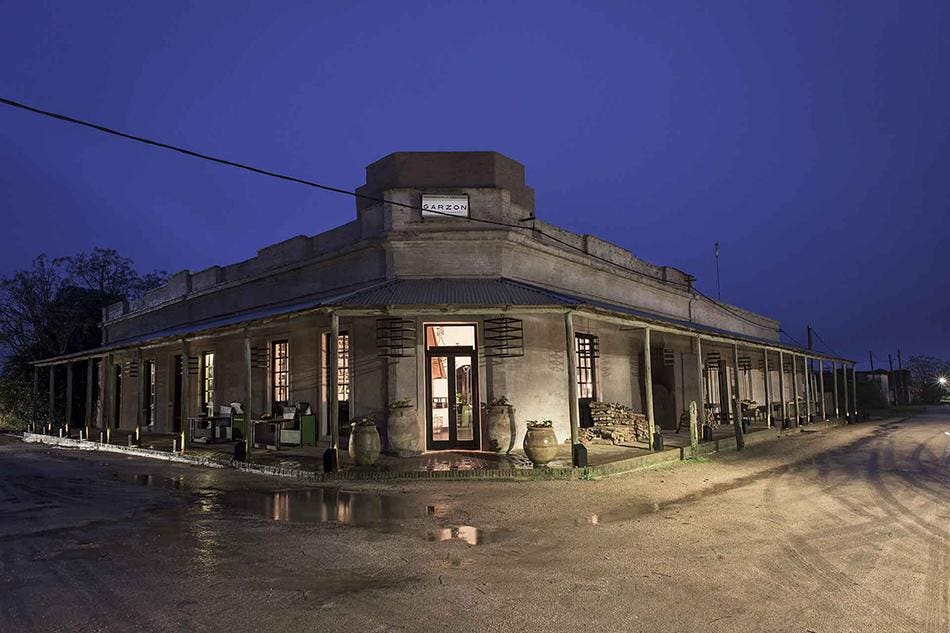 And the rooms in the hotel are just as well executed as the meals. They’re filled with touches straight from Mallmann himself – you’re bound to find plenty of lemons in your room as well. Both rustic and cozy, Mallmann has done an excellent job transforming this former general store into one of the most tucked away hotels in the world. (Fresh flowers on their bedside stand, wood-beamed ceilings, clean and simple white marble and tile bathrooms and floor to ceiling windows looking out into an herb garden and lemon trees doesn’t hurt either.)

But the food shouldn’t get all the attention in Garzón, the wine in this area is out of this world as well. (Just ask Wine Enthusiast.)

When it comes to wine, this part of the country is at the forefront of a movement. And that’s because of places like Bodega Garzón, a stunning and sophisticated winery that sits sprawled across 524 acres on the outskirts of Garzón. (It’s also the first sustainable, LEED certified winery outside of North America.)They’re mastering everything from Tannats to Marselans. From their Single Vineyard Tannat to a 2016 Marselan Reserve and Single Vineyard Albariño that are to die for (and a new foray into sparkling wine), there are plenty of great bottles and varietals produced right here, out in the winery’s incredibly diverse terroir. And tasting your way through them from the winery’s restaurant, overlooking the winding plots of grapes, is one of the most perfect ways to spend an afternoon. (Mallmann is the winery’s Culinary Director as well. So again, there will be no shortage of great meals while you’re here.) 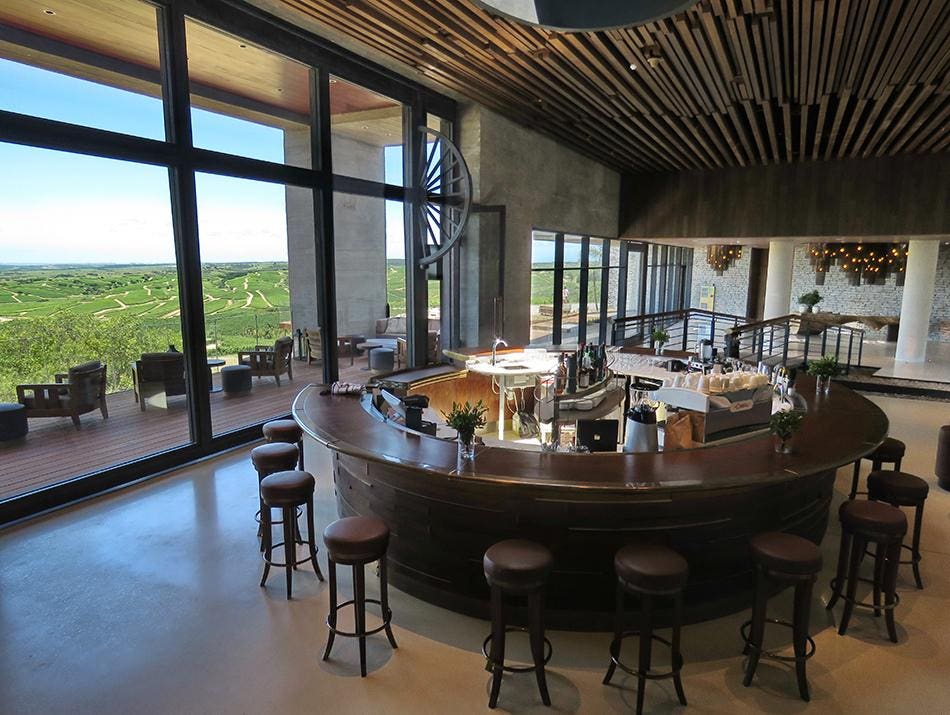 The bar area inside the Restaurant at Bodega Garzón.BODEGA GARZÓN

But there’s one more thing that you need to know about Bodega Garzón. And, if you ask me, it’s the coolest, most exclusive part of the winery. A place that most visitors won’t see, let alone even know about. And that’s their Garzón Club, a, for now, invite-only wine club.

Membership into the club (which is rumored to be in the hundreds of thousands to join) includes access to the otherwise off-limits Garzón Tajamares Golf Club, a private 18-hole golf club designed by Masters and U.S. Open champion Angel Cabrera, as well as access to winemaker and Bodega Garzón consultant Alberto Antonini and private tastings at any of the Bulgheroni Family Portfolio wineries (which includes wineries in Napa Valley, Argentina, Tuscany, Bordeaux and South Australia). Members are also able to blend and barrel their own wines, which the team at Bodega Garzón will carefully look after through the aging process. (Which basically means your barrels are in the best possible hands they could be in.) 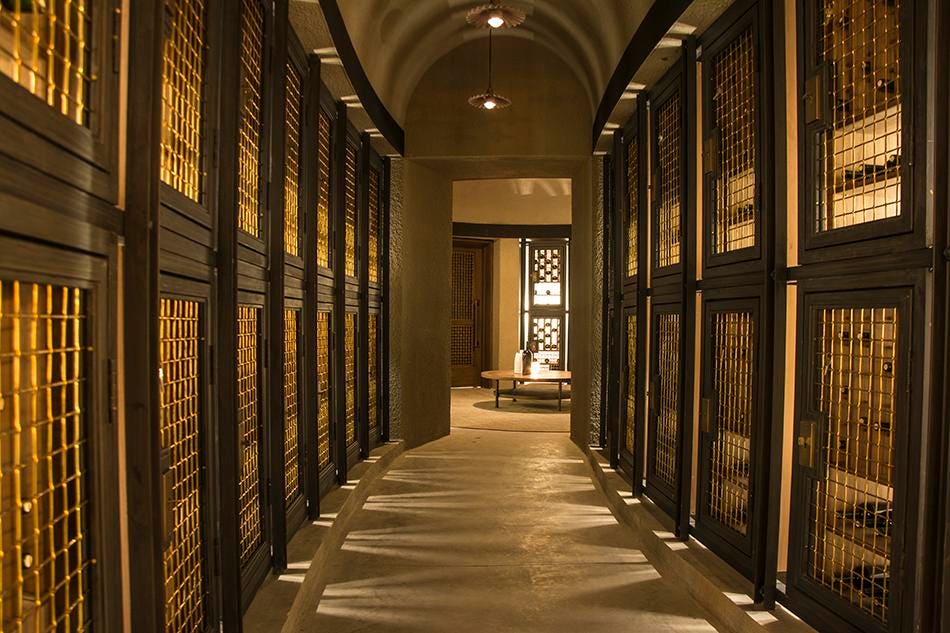 A rare look inside the exclusive members-only Garzón Club.BODEGA GARZÓN

And, if this past year was any indication of what’s to come for the winery – they were named the New World Winery of the Year by Wine Enthusiast Magazine and were the focus of the first episode of the new Amazon series It Starts with Wine which premiered in January – then there’s plenty of reason to get there – and to Garzón – now. Because Wine Enthusiast and I aren’t the only two who have recently discovered and become fans of this incredible piece of South America.