Uruguay and its vineyards – a hidden gem for wine tourism 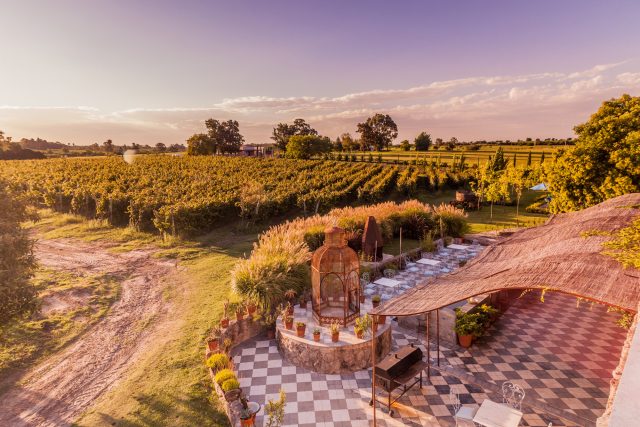 With wine tourism’s inexorable growth around the world showing no sign of abating, adventurous wine tourists on the lookout for fresh destinations should focus on Uruguay. Something of an undiscovered gem, even though wine has been made there since the nineteenth century, the ‘kid-brother’ of Argentina, with whom it retains very close links, is punching well above its weight. Wine tourism in Uruguay looks to have a bright future.

Its relatively small size, certainly by Latin American standards, makes it very easy to get around. Around two-thirds of the surface area of the United Kingdom, it has only 3.4m people and more than three times as many cattle. All grass-fed, these provide some of the best beef in the world. This is an ideal accompaniment for some of Uruguay’s hearty reds, although its reputation of yesteryear for producing tannic Tannats has been supplanted by a desire to make wine that appeals more to the global palate.

While some traditionally styled Tannat remains in production, the vast majority of wine made from this and other black grapes has soft, approachable tannins with forward New World fruit. Above all, this is a country whose wines are now characterised by a freshness that makes them very drinkable.

“We are the New Zealand of South America,” declares Daniel Pisano, who runs the highly regarded Pisano winery with his two brothers thirty kilometres northeast of Montevideo. “We have high natural acidity thanks to the wide diurnal range in Uruguay. Cool nights allow us to retain acidity, meaning that we have to make minimal acid additions. There is a good balance between acid, alcohol, tannin and fruit.”

Uruguay would appear to have all the right ingredients to follow New Zealand’s success as a wine tourism destination of note. It has some wonderful places to stay for wine tourists, and its cellar doors are being flung open to welcome them.“We say to anyone who loves wine, ‘Please come, we promise you will not be disappointed,” says Fabiana Bracco, owner of Bracco Bosca winery near Montevideo, and an ambassador for Uruguayan wine.

To get to Uruguay from the UK, there are no direct flights, but an agreeable way of entering the country is by ferry from Buenos Aires, whether to Colonia in the west or Montevideo further east. From Colonia, it is an hour by road to the charming town of Carmelo, a natural starting-off point for a wine tour of Uruguay.

Just outside Carmelo is the delightful Narbona Wine Lodge. The only Relais & Chateaux hotel in Uruguay, it has seven ginormous bedrooms, with two in the old homestead and the remainder attached to the bodega. Traditional old furniture gives it an estancia-like feel, and with its vineyard views, it is a pleasurably tranquil place to stay. The food is superb, with its celebrated pasta and homemade dulce de leche. Narbona’s Tannat vines, first planted in the 1870s, provide quality fruit that allows talented winemaker, Valeria Chiola, to craft three differing styles from the variety. If Puerto Carmelo 2016, a 12.5% offering with soft tannins and attractive red fruit, is a highly drinkable everyday quaffer, then Tannat Roble 2014 is a premium wine for consumption with or without food. That sees 30% new French oak, while the iconic Luz de Luna 2014 comfortably copes with 19 months in 100% new French oak. Complex and concentrated, with powerful but beautifully integrated tannins, this is a brilliant advert for top-end Uruguayan Tannat.

Chiola, with whom Michel Rolland worked as a consultant for Narbona from 2011-14, says the Frenchman’s influence was profound. “He helped us most in the vineyards, where we were looking for better balance, especially with the tannins,” Chiola told db. “Our largely calcareous soils have a high pH, which leads to a low pH in our wines and high acidity.”

A few miles down the road from Narbona is the Carmelo Resort & Spa, one of just 16 Hyatt hotels globally to qualify for the franchise’s special Unbound Collection. The only one in South America, its eucalyptus forest location with 24 villas and suites overlooking the River Plate is stunning.

Throw in outstanding cuisine, and an extensive wine list that includes Uruguay’s leading labels, and you have a world-class hotel in prime wine country. Along with Narbona, there are two other notable bodegas locally – Irurtia, which dates back to 1913, and the oldest winery in Uruguay, Los Cerros de San Juan (founded in 1854). Irurtia, a large-scale producer of over a million bottles a year, makes appealing Viognier.

From Carmelo, it’s a scenic three-hour drive through rolling hills to Montevideo, where two splendid hotels offer wine tourists different options. The monumental five-star Sofitel, a national landmark on the waterfront in upmarket Carrasco, is noted for its opulent French architecture. Built over eight years between 1913-21, it was closed in the late 1990s after falling into disrepair, but re-opened six years ago after a complete renovation.

By contrast, the boutique Alma Historica hotel, in the old part of the city, was a former mansion overlooking Plaza Zabata that has been beautifully converted. Its location 400 metres from the ferry terminal makes it an ideal hotel for those leaving, or arriving in, Montevideo by boat. Nearby, in the Punta Carretas suburb, is must-visit restaurant Baco.

From Montevideo, many excellent wineries can be reached on a day trip, including a quintet that should not be missed: Pisano, Bouza, Bracco Bosca, Stagnari and Juanico. Garzón, meanwhile, is three hours drive east of the capital, and ideally requires an overnight stay at Maldonaldo. Pisano offers tasting by appointment, but once you are there, the welcome from Daniel and his brothers could not be warmer.

Half of their 30,000 cases per year are exported to as many 48 markets, with the USA and UK numbers one and two. Founded by the brothers’ grandfather in 1916, this is a prestige winery with a host of terrific wines, including the only Torrontés in Uruguay, and two other rare varieties there – Sangiovese and Petit Verdot. Three styles of excellent Tannat are made: sparkling, fortified and dry.

Bracco Bosca, while much smaller, is no less special, for visitors can’t fail to be infected with the irrepressible enthusiasm and bonhomie of owner Fabiana Bracco. Varieties like Ugni Blanc, Moscatel, Sauvignon Blanc and Syrah are found there along with Tannat, while her Cabernet Franc is, in my opinion, the best in Uruguay. Silky tannins, gorgeous red fruit and fine structure from 100% new but lightly toasted French oak are its hallmarks.

While Antigua Bodega Stagnari is another boutique producer whose Tannat is excellent, Bouza and Juanico each attract large numbers of visitors. Both are beautiful estates that are immaculately maintained, producing impressive ranges of wines. Bouza makes some very good Albariño and Riesling, along with some Pinot Noir, Merlot and Tempranillo. Its super-premium Tannat is made in two styles: unoaked, and with 80% new oak.

Bouza’s top-class restaurant and remarkable collection of old vintage cars are another reason why it attracts so many visitors. It is a standard-bearer for Uruguayan wine tourism, and a fitting symbol of the quality of the country’s wine industry.