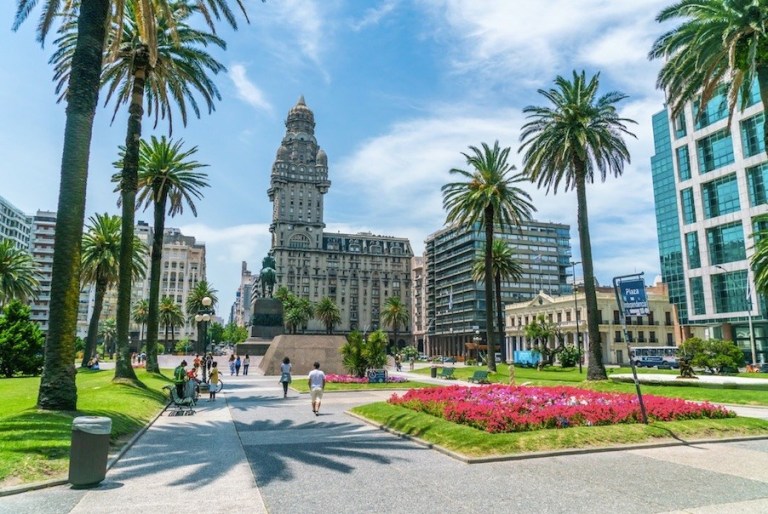 Sandwiched between the giant economies of Brazil and Argentina, Uruguay has traditionally been at a disadvantage when it came to attracting foreign investment into its promising tech sector. But with the recent emergence of the country’s first unicorn and another company developing a sophisticated coronavirus app within a week, the diminutive Latin American economy has put itself more firmly on the global map.

Google and Apple heaped praise on GeneXus after the Montevideo-based software company spearheaded a push to develop a sophisticated Covid-19 advice app, with early success meaning Uruguay was one of the first countries to be chosen by the US groups to pilot contact tracing technology. In September the country’s tech scene was thrust into the spotlight again after cross-border payment processor dLocal, backed by US-based private equity firm General Atlantic, raised $200m to become Uruguay’s first unicorn. “We are setting the bar high,” Omar Paganini, Uruguay’s industry minister, told the Financial Times. “If Uruguay can become a player in this field it would be very valuable for the country. This goes beyond our government, it is a policy of state,” he added, explaining that the tech sector is deemed to be of strategic importance. Uruguay’s relatively new conservative government wants to emulate the success of countries like Israel, another small and open economy with a thriving tech sector. While the country’s economic and political stability means it is often compared favourably to its neighbours, its competent handling of the pandemic in one of the worst hit regions in the world has further burnished its image. Small nations like Uruguay, which has a population of 3.4m, should concentrate on “developing and attracting talent and entrepreneurs, and being a relevant part of the [global tech] ecosystem”, said Francisco Alvarez-Demalde, managing partner of Riverwood Capital, a private equity firm based in Silicon Valley. “The reality is that the companies that are most successful in tech are operating in a parallel universe without geographical borders,” he said. Our principal focus is on staying up to date. Right now I’m looking at China. I don’t want to be surprised by what’s happening there. Nicolás Jodal, chief executive of GeneXus Yet Uruguay’s small size has been a factor in its success, forcing businesses to look early on beyond its national borders for growth. This has been the case for dLocal, which has nearly doubled in size each year since its 2016 launch and is now valued at $1.2bn. It began expanding abroad almost immediately and now operates in 20 emerging markets across Latin America, Asia and Africa, providing services to companies like Amazon, Spotify, Uber and Booking.com. “For us, it is key to continue expanding. At the end of the day, if you want to be a global emerging markets payment company, you need to be in most emerging markets,” said Jacobo Singer, chief operating officer. They have also been successful in attracting talent from elsewhere: earlier this month, dLocal poached two senior executives from MercadoLibre — the largest online commerce and payments system in Latin America and based in buzzier Buenos Aires — to be its chief financial and technical officers. About two-thirds of its nearly 300 employees are based in Montevideo, Uruguay’s laid-back capital on the banks of the River Plate. “Uruguay has played an important role in providing us with great talent,” emphasised Mr Singer.  Analysts attribute Uruguay’s tech success to several factors, among them concerted efforts by far-sighted governments to promote entrepreneurship and innovation that date back more than half a century. In the 1960s Uruguay became the first country in the region, by a long way, to introduce computer science degrees — just two years after MIT.

More recently, it became the first country in the world to implement a one-laptop-per-child programme in public schools in 2007. Such policies have allowed the country to punch above its weight when it comes to tech. “The whole of Uruguay is smaller [in terms of its population] than a neighbourhood in São Paulo,” pointed out GeneXus chief executive Nicolás Jodal. A well-educated population together with the creation of free trade zones against a backdrop of political and economic stability proved fertile ground for the nascent tech sector. One early success was the creation of Scanntech in 1991, which provides retail and payments software, and is backed by Sequoia Capital. “Covid was just the cherry on top,” said Ivonne Cuello, chief executive of the Association for Private Capital Investment in Latin America (LAVCA). “What normally happens in a decade in Latin America happened in just a few weeks.” Recommended How to Lead How to launch a coronavirus app in one week Although Brazil, followed by Mexico and Argentina, has always attracted the lion’s share of venture capital in the region she says that Uruguay has shown it is now possible to produce unicorns and attract global investment funds in small countries too. Other Uruguayan start-ups to have attracted funding from international investors in recent years include Meitre, a restaurant management platform in which Andreessen Horowitz made a $1.6m investment last year and digital banking platform Bankingly which raised $5.3m from impact-focused private equity firm Elevar Equity in 2018. Ms Cuello argues that Uruguay’s relative minnow status is beneficial in another way: “In the early days in Silicon Valley it was a small ecosystem with a small, highly-educated population. So when you have that, and people know each other, you start seeing momentum. It’s like you can feel that happening in Uruguay [now],” she said.

Despite the success of dLocal, the great challenge for tech in Uruguay and its neighbours remains financing. There are no venture capital funds in the country and precious few elsewhere in Latin America. For Mr Jodal, the biggest concern is keeping pace with fast-moving innovation around the world. “Our principal focus is on staying up to date. Right now I’m looking at China. I don’t want to be surprised by what’s happening there,” he said. But by fostering the talent that enables the sector to grow, Uruguay may also benefit from Argentina’s continuing economic decline. Many wealthy entrepreneurs — among them MercadoLibre co-founder Marcos Galperín — have already chosen to relocate to the country. As Mr Alvarez-Demalde points out: “Once you have the talent in one place, a lot of good things start to happen.”