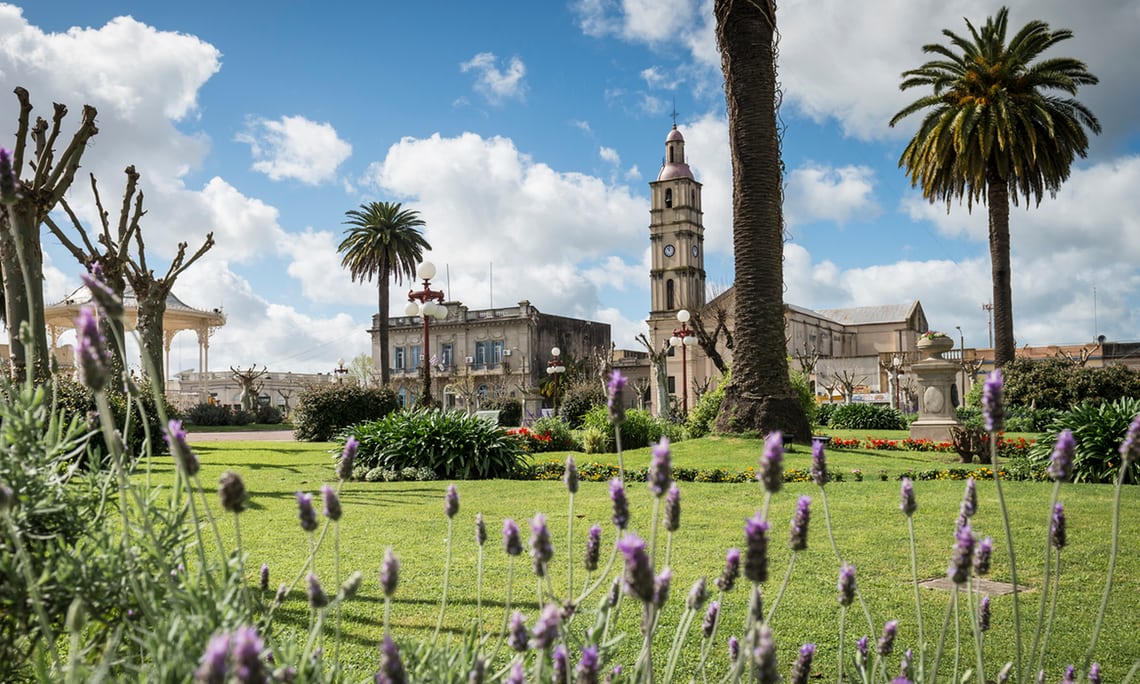 Uruguay heritage site, a must visit.

If you are lucky enough to reach the tiny Uruguayan town of Carmelo on a summer evening, you can cycle through tranquil vineyards, past lavender bushes and a yellow chapel glowing in the fading sunset to the Italian social club for dinner. Founded in the 1930s, very little has changed since then. Lo Korrea still serves the cheap, hearty food Italian farmers devoured after a day harvesting grapes on Saturday nights and sometimes Sunday lunch. The food is unrepentantly old-fashioned, heavy in cream and sugar, and the prices are, too – just under £12 for wine and three courses. On the evening we went there was a 60th wedding anniversary, with music seeping through a wall into the annex where we ate, and the odd child in a suit or frilly dress, eyes wide with sugar and excitement, wandering through the door.

We ended up in Carmelo on our way to somewhere else even more improbable. Fray Bentos. Many people who recognise the name are astonished to find out that it is really a town, as opposed to the British brand of canned meat products, originally corned beef and then ready-made pies. It’s actually both. The sleepy, charming riverside town in Uruguay, was also home to the Fray Bentos brand which began in 1863 in a sprawling factory. In its heyday this cathedral of the industrial age, built along the town’s lush riverbank, fed half the world, churning out corned and frozen beef to fuel wars and the rise of empires. It played such a role in the transformation of how we eat worldwide, bringing meals into the industrial era, that three years ago Unesco declared the abandoned and ruined complex a world heritage site.

When my Uruguayan godmother told me Fray Bentos was a place, not just a pie brand, we decided we had to visit this forgotten icon. The production lines have long since closed, the docks are decaying and it has fallen back into sleepy silence, disturbed only by tourists drawn to its strange and striking heritage. It is an unlikely holiday spot but a rewarding one, the quirky colonial charm of the town a perfect counterpoint to the stark remains of the factory, and if you tire of history there are beaches, ranches and one of Uruguay’s most unusual and relaxing wine areas just a short drive away.

According to local legend, Fray Bentos was named after a shepherd who pointed travellers on their way. His legacy has been picked up by the locals who guide visitors through the sprawling factory complex, paved with iron to withstand the weight of thousands of cattle. There is a strange beauty in parts, particularly the turbine hall. A checkerboard marble floor (the stone was chosen in the 1920s for insulation), vast wheels arching towards the vaulted ceiling, frozen by time and rust, and sunbeams picking out the dust motes in the silent air give it something of the feel of an abandoned temple.

There is even an inner sanctum, a control room of practical luxury, panels adorned with intricate metal-work and more marble, where engineers tended to the mysteries that kept the wheels turning. The plant was founded by a German inventor whose “meat extract” a liquid precursor to Oxo, needed vast quantities of beef, so he came to Uruguay where cows were plentiful and cheap. In the 1920s a British company bought the firm, giving it its local nickname, El Anglo. The town’s name became a byword for corned beef. Meat from Fray Bentos fed troops in both world wars, and British troops even nicknamed one tank Fray Bentos, a dark joke about a crew that were little more than minced meat in a can.

A small museum tells the plant’s history and features curiosities such as a two-headed calf and Uruguay’s first lightbulb. When the tour finishes you can mull over the cycles of wealth and decline that played out here, the dawn of globalisation before the word was even coined, over lunch at La Chimenea, on a riverside terrace built over the plant’s former water pumping station, with a view clear across to Argentina. Inside, wood burns to charcoal in a hearth several metres wide, to grill the parrillada (barbecue) of perfectly seared meats (and a few vegetables if you insist) – a Uruguayan national passion. The owners are so friendly that when we found out they didn’t take cards, and we didn’t have enough cash, they told us just to put an envelope under the door later. It only serves lunch though, so save dinner for the town, a separate world from the factory complex with its villas, Anglo-Germanic sense of order, and probably the world’s only town-square monument to corned beef.

Wealth seeped over into Fray Bentos, so the streets are adorned with strange and charming curiosities, such as the bandstand in the central square which is a copy of the one in Crystal Palace, a lavishly decorated theatre and rows of grand colonial homes, with high barred windows hiding inner courtyards from curious passersby. One has been turned into a hotel, the Posada del Frayle Bentos, whose sense of history has more or less survived a slightly brutal modernisation, with the addition of a plunge pool which offers a welcome chance to cool off on summer days. Locals stroll around to relax, or drive excruciatingly slowly up and down the riverfront. “It’s a small town – if we drove fast we’d be at the other end too quickly,” one explained.

You can get a simple dinner and a drink with a view at Cervecería Hoffman. Save dessert for ice-creams at Heladeria Deleite, where they have five or six variations on dulce de leche – the creamy caramel that is a national obsession. If you fancy some exercise after that, there is a nine-hole golf course designed for El Anglo executives by the famous course architect Alister MacKenzie and recently refurbished for the top brass of a new factory complex upriver. Its open to visitors, although don’t expect golf carts or Trumpian flourishes of luxury.

We had come to Fray Bentos through Carmelo, the most northern terminal for ferries from Buenos Aires, and somewhere else with a delicious sense of forgotten time and place. The streets were as empty as a town in a Gabriel García Márquez novel, during siesta, or after a cataclysm. The old wine district of Colonia Estrella is just 15 minutes by bike from Carmelo, across pancake-flat fields and empty roads, where we stayed at a lodge and boutique winery, Campo Tinto. The star grape in the region is an unusual variety called tannat, which grows well in Uruguayan soil and has become the country’s calling card, like Malbec for neighbouring Argentina. Campo Tinto also has a viognier and a special Uruguayan blend – medio y medio – a kind of sparkling semi-sweet rosé, a tribute to a cocktail popular with port workers in Montevideo and perfect for summer afternoons.

Uruguay is often overlooked, sandwiched between Argentina and Brazil, its two vast neighbours so famous for their beauty and culture. But the country is blessed with a charming landscape, extremely friendly people and a unique and fascinating history, and perhaps the most consistently progressive country in Latin America. It also offers tourists another rare incentive to visit. Paying with an overseas credit card brings a VAT refund, in effect a 22% discount on everything tourism-related, including hotels, hire car and restaurants, all paid automatically into your account with just a small delay. So when you return home you can savour the steady flow of refunds along with your memories.