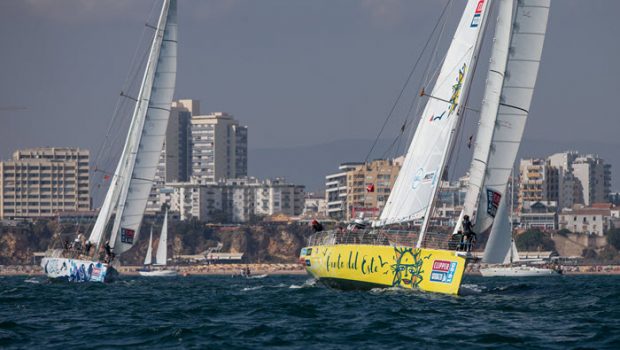 Portimão, Portugal (September 15, 2019) – It was a brilliant start for the Punta del Este team as the second race got underway for the Clipper 2019-20 Round the World Yacht Race. The 11 teams will carry on for 5195 nm to Uruguay, expected to arrive between October 12 and 16 in the finish port of Punta del Este.

The excitement began before race start with the top two teams, Punta del Este and Qingdao, declaring that they will play their Joker Card. The Joker Card means that any race points earned will be doubled, meaning a potential 22 points are on offer if Punta del Este or Qingdao win the race.

The early goings saw Visit Sanya, China as the first across the start line, followed closely by Punta del Este, and WTC Logistics. But by the first mark, Punta del Este was in command. The team continued to extend their advantage and had built a significant lead by the end of the course.

WTC Logistics and Qingdao were the second and third teams to finish the course. Qingdao is second in the overall standings, just two points behind Punta del Este, meaning the competition between these two teams over the next 30 days will be fascinating to watch.

There will be tactical decisions to be made in the first few days. Teams will need to decide whether to sail to the east, west, or straight through the Canary Islands. Pick the wrong route and teams will get stuck in the lee of the land, watching the rest of the fleet accelerate towards the Cape Verde Islands.

The Scoring Gate lies just north of the Cape Verde Islands and teams will need to weigh up whether to deviate from the rhumb line and go hunting for the three, two and one bonus points on offer to the first three boats to cross the gate.The Doldrums will be both a highlight and a challenge of this race, testing the teams both mentally and physically with unpredictable conditions, big wind holes, squalls, and high temperatures.

Teams will need to be clever when they take advantage of the Doldrums Corridor race rule, which is a tactical mechanism allowing teams to motor-sail through six degrees of latitude (or 360 miles), so long as they are within the set gate and time limit.Once they are through the Doldrums, teams will continue south to pick up the easterly trade winds, being careful not to get too close to the South American coast. The Dell Latitude Rugged Ocean Sprint will be off the north-eastern coast of Brazil, between the lines of longitude 05°S and 10°S.

The first three teams with the shortest elapsed time between the two designated positions will receive three, two, and one bonus point respectively.

About the Clipper Round the World Yacht Race:
The Clipper Race was established in 1996 by Sir Robin Knox-Johnston, the first person to sail solo non-stop around the world in 1968-69. His aim was to allow anyone, regardless of previous sailing experience, the chance to embrace the thrill of ocean racing; it is the only event of its kind for amateur sailors.

Held biennially, the Clipper 2019-20 Round the World Yacht Race gets underway September 1 for the fleet of eleven identical Tony Castro designed Clipper 70s. This 12th edition has attracted 688 crew representing 43 nationalities for the 41,000+ nm course. The race finishes on August 8.

The course is divided into 8 legs and 15 individual races, with some of the crew in for the entire circumnavigation while others will do individual legs. The team having the best cumulative score over the entire course will win the Clipper Race Trophy.

The Clipper 2019-20 Race Route:
The fleet departs from London, UK to Portimão, Portugal; across the Atlantic to Punta del Este, Uruguay; the South Atlantic to Cape Town, South Africa; across the Southern Ocean’s Roaring Forties to Fremantle, Western Australia; around to the Whitsundays on the east coast of Australia, back into the Northern Hemisphere to China where teams will race to Qingdao, via Sanya and Zhuhai; across the mighty North Pacific to Seattle, USA; to New York via the famous Panama Canal; to Bermuda and then it’s a final Atlantic crossing to Derry-Londonderry in Northern Ireland; before arriving back to London as fully proven ocean racers.