Posted in Agri-Business, Investments in Uruguay, living and working in Uruguay, real estate, Tourist attraction On May 16, 2019 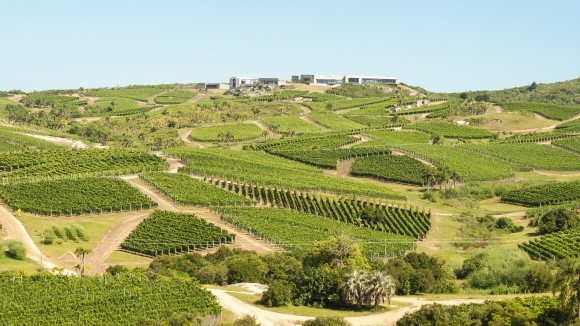 Bodega Garzón, a boutique winery in the idyllic countryside of Garzón, Uruguay, founded by international vintner Alejandro P. Bulgheroni, is pleased to announce that it is the first sustainable winery outside North America to be awarded LEED Silver certification and the first facility in its entirety including process, hospitality, offices, cellar and wine club to be one hundred percent LEED Silver certified. The LEED (Leadership in Energy and Environmental Design) rating system, developed by the U.S. Green Building Council (USGBC), is the foremost program for buildings, homes and communities that are designed, constructed, maintained and operated for improved environmental and human health performance.

Bodega Garzón’s icon wine Balasto, the first wine to be sold by Bordeaux Negociants, is made in the LEED Silver certified winery. Christian Wylie, Managing Director, is honored to be showcasing three vintages of Balasto at the upcoming international wine and spirits exhibition Vinexpo Bordeaux 2019, as the event’s theme – Shape the Future – is timely. Bodega Garzón will also be taking part in a symposium the event is launching that will explore the effects of climate change on the wine and spirits industries.

Elegantly built into the hills and over natural terraces – a design that enables the process of gravity winemaking – Bodega Garzón has developed a biodiverse environment and optimizes energy efficiency with the largest green roof with native species in Latin America, rainwater harvesting and reuse, as well as a high-efficiency HVAC with heat recovery. The modern winery is producing wines celebrated by preeminent wine critics and establishing itself as a world-renowned destination furthering sustainability, wine culture and tourism in Uruguay.

“As the first to make wine in the Garzón region of Uruguay, we had a responsibility to construct something that will have a long-lasting legacy and that will protect the purity of the surrounding land and wildlife,” notes Bulgheroni. “I’m extremely proud of my team for achieving this award and for setting a new benchmark in the wine industry for sustainable design.”

In 1999, when Mr. Bulgheroni and his wife Bettina acquired the property that evolved into Bodega Garzón, they embarked on a journey to create terroir-inspired, estate-grown and limited-production premium wines with integrity, concern for biodiversity, and the preservation of natural resources. Under Bulgheroni’s direction, the winery has pursued LEED certification and sustainable agriculture and adopted green farming practices in the vineyards. Influential winemaker and viticulturist Alberto Antonini oversaw Bodega Garzón vineyard plantings and development, combining the styles of old-world elegance and new world energy to craft the estate-grown, limited-production premium wines.

Bodega Garzón is an emergent family estate in the idyllic country of Uruguay, pioneered by Alejandro P. Bulgheroni that produces limited-production premium wines from estate-grown, sustainably-farmed grapes. Unique in the region, Bodega Garzón is leading the charge in winemaking innovation, varietal experimentation, and sustainability. Although focused primarily on Tannat, Uruguay’s national grape, Bodega Garzón works with many other varietals and clones. It is one of the few producers of Albariño in the country.

Opened in March 2016, Bodega Garzón sets new benchmarks for elegance of design, modern technology, and sustainable practices. Bodega Garzón is the first winery outside North America to comply with the strict requirements set by the United States Green Building Council (USGBC), and the first winery in the world to earn LEED certification for its entire facility, including winemaking and hospitality.